Annual Conference of the European Association of Psychology and Law

Welcome to TRANSYLVANIA: "the land beyond the forests"!

An alluring and mysterious place, where the Carpathian Mountains have always provided natural protection for this Eastern European hidden gem, Transylvania can be considered one of the most picturesque regions, alongside Provence (France) and Tuscany (Italy).

Trasylvania is also the largest region of Romania and it is abundant in mountains, untouched forests, archaic villages, hearty food, warm-hearted and hospitable folks. 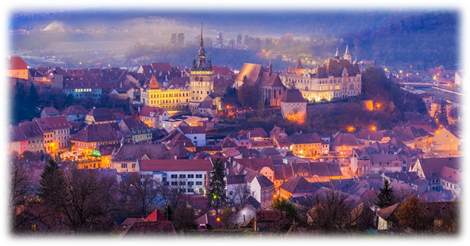 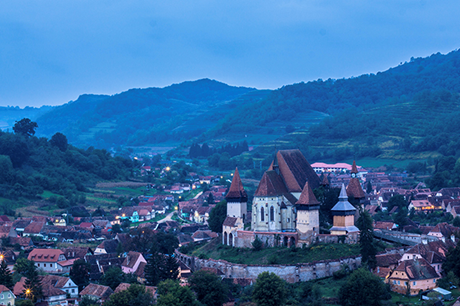 With around 100 castles and fortresses and about 70 fortified churches, Trasylvania is a go to place for adventure lovers.

Transylvania has a long-standing multicultural history. The current population consists of mainly Romanians and other ethnic groups: Hungarians, Roma, Ukrainians, and Germans.

100 A.D.: Dacia was conquered by the Roman Empire, giving birth to Romanians (ruins of Dacian citadels are now part of UNESCO heritage)

9th century: Transylvania is established as a principality under Hungarian rule, becoming Kingdom of Hungary in 1000, despite the Romanians having an overwhelming majority.

12th century: German merchants arrived to help defend the region against the Tatars and Turks. They built 7 fortress towns, known as the Siebenbürgen, and hundreds of fortified churches, all UNESCO heritage sites.

Asociated with Bran Castle, the present pop-culture mythology Count Dracula, said to have been inspired by the 15th-century noble descent and military governor, famous for impaling his enemies (estimates to be around 80.000) on long stakes (nicknamed Vlad the Impaler). Also during this time period, the Banffy Castle, the beautiful residence of Sigismund of Luxemburg had been donated to the Hungarian noble Losonc family. The well-known location (near Cluj-Napoca) is now the the site of the annual Electric Castle music festival in the summer.

For more infomation about the History of Transylvania, check out this link.

Half of the Carpathian Mountain range is in the heart of Transylvania. The highest peak is Mount Moldoveanu (2,554 meters), in the Fagaras Mountains.

The Carpathian Mountains are home to wolves, lynx and Europe’s largest population of brown bears. Around 5000 bears roam the oak and beech forests (60% of Europe’s entire brownbear population).

‘The road to the sky’ or The Transfagarasan is a snaking road that stretches 56 miles between Transylvania and Wallachia. It took 6,000 tons of dynamite for it to be carve out of the towering Transylvanian Făgăraş Mountains, being built at an enormous altitude of over 2,000 metres during the 1970s. It was named the world's best road by Top Gear presenter Jeremy Clarkson.

It’s got a far scarier secret than Bran Castle: Hoia-Baciu Forest near Cluj-Napoca is the Bermuda Triangle of Eastern Europe, being considered one of the scariest forests in the world.

It has forgotten, yet majestic villages that offer a beautiful traditional living space, some of them being UNESCO World Heritage sites and are well worth a visit. Prince Charles, for example has bought some of them with a view to renovate the buildings and rent them out to increase tourism, helping the local economy. What can we do but thank his majesty from the bottom of our heart?

Transylvania has the real-deal four seasons! Summers are hot, with temperatures between 25-36 degrees Celsius (F 80s or 90s) so that’s the season for hiking, and swimming. It’s very likely that September will be no different, around 20-25 degrees Celsius, perfect weather for a conference you could say.

How to prepare for your trip to Transylvania:

Transylvania’s official language is Romanian, but there are many towns where Hungarian is often spoken, for example: Miercurea Ciuc, Gheorgheni, Brasov, Odorheiu Secuiesc, Cluj-Napoca. Romanian is an Eastern Romance language, and Hungarian a Finno-Ugric one (closer to Estonian and Finnish).

Here are some essential expressions you can use to get around:

Thank you. - Mulțumesc [mult͡suˈmesk] in Romanian - Köszönöm [ˈkøsønøm] in Hungarian

No. - Nu in Romanian - Nem in Hungarian

If you want more about what to do in Transylvania, you check out our Social Programme page.

We have 14 guests and no members online